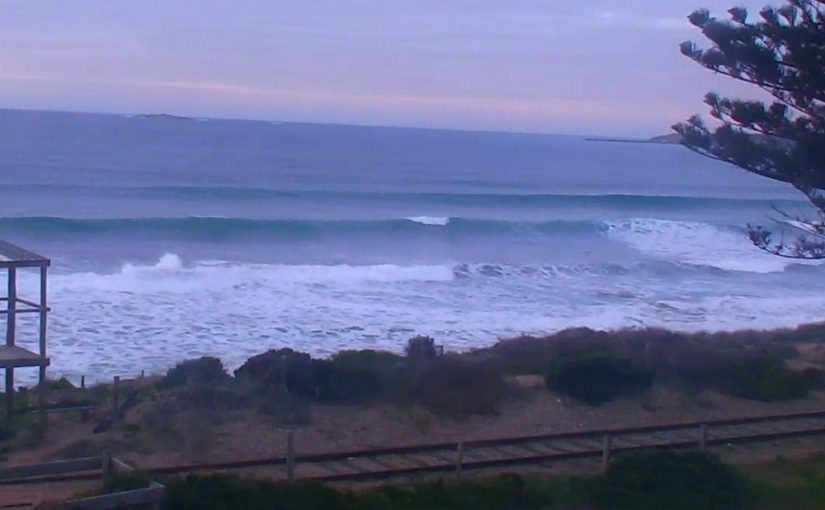 It’s not looking too bad on the South Coast this morning with winds threatening to swing back offshore, and a solid Southerly swell running. Right now the wind is only around 7 knots from the WNW and conditions are reasonably clean, with slightly raw, well lined up sets. Surf is easily 5′ at Middleton and The Bay looks alright for an early paddle. There are some bigger sets breaking along the Day St. / Surfers / Cliffs stretch, some several hundred meters off the beach. It’s also pretty big between Port Elliot and Victor, especially between Chiton Rocks where the sets are 4 – 5′ and Knight’s where it’s thumping in. The Dump has clean 2 – 3′ waves as well. The wind looks like it will settle into a Nor-wester for the rest of the day, but the BoM predicts it will strengthen to 20 knots plus later. The large swell will become blown out if the wind gets that strong. Worth a look early though. Check the surf forecast to see how the next few days are looking. 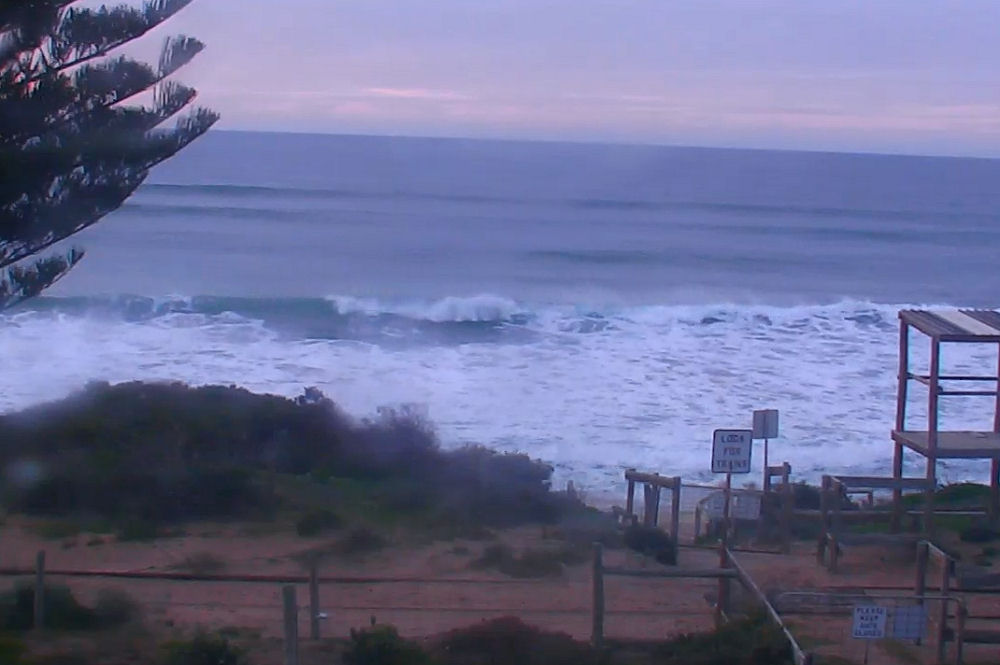 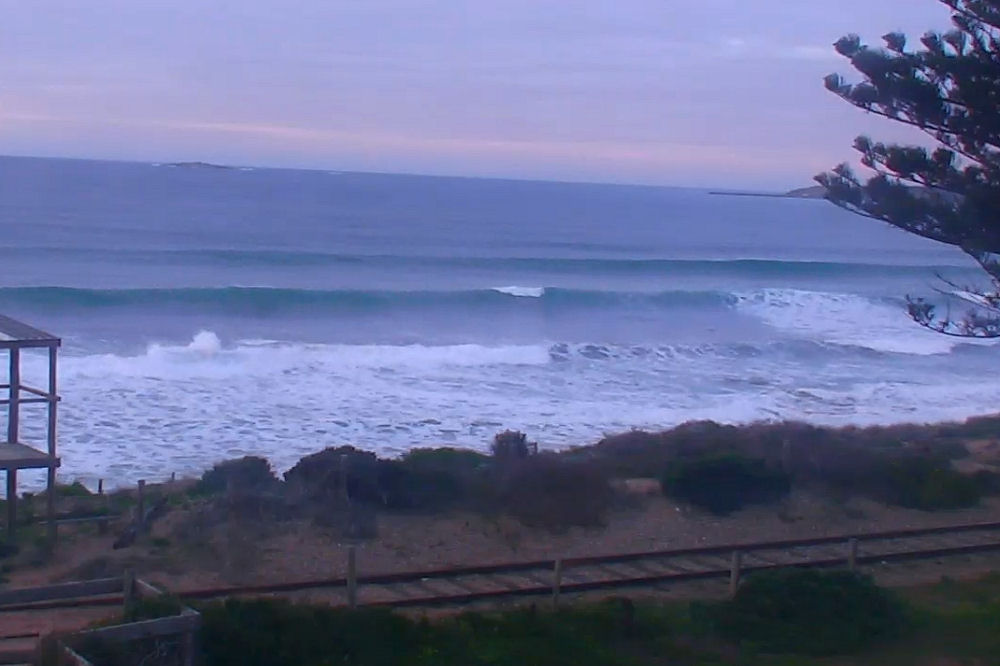 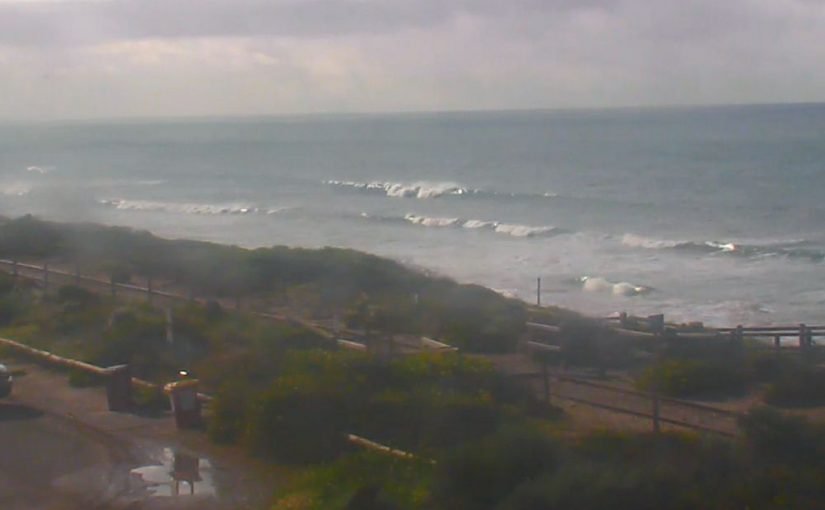 The wind has eased to a moderate Westerly on the South Coast this morning, and conditions are semi-clean with a bit of leftover bump in the swell. There are 3 – 4′ sets along the Middleton / Day St. stretch, and 2 – 3′ waves around at Chiton / Gap. Middleton Bay / Point look OK early. Waits and Parson’s will be bigger, Waits Point will be well situated with the wind and solid. The BoM predicts @-SW winds around 20 knots fro the rest of the day, and the swell will remain around the same size. The breeze may be more onshore than cross-shore after lunch. Check the surf forecast to see how the next few days are looking. 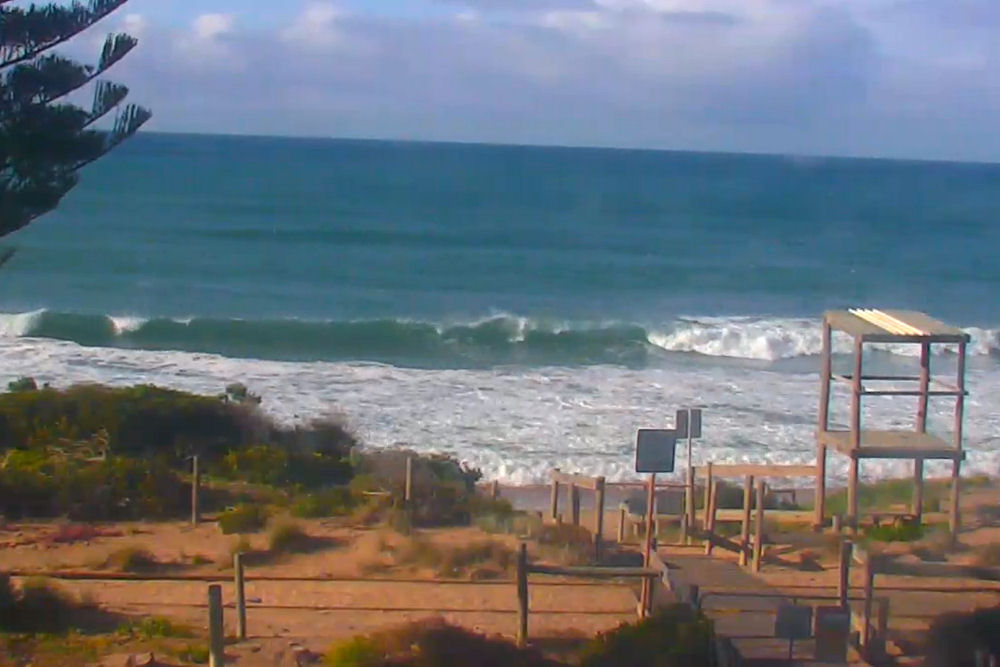 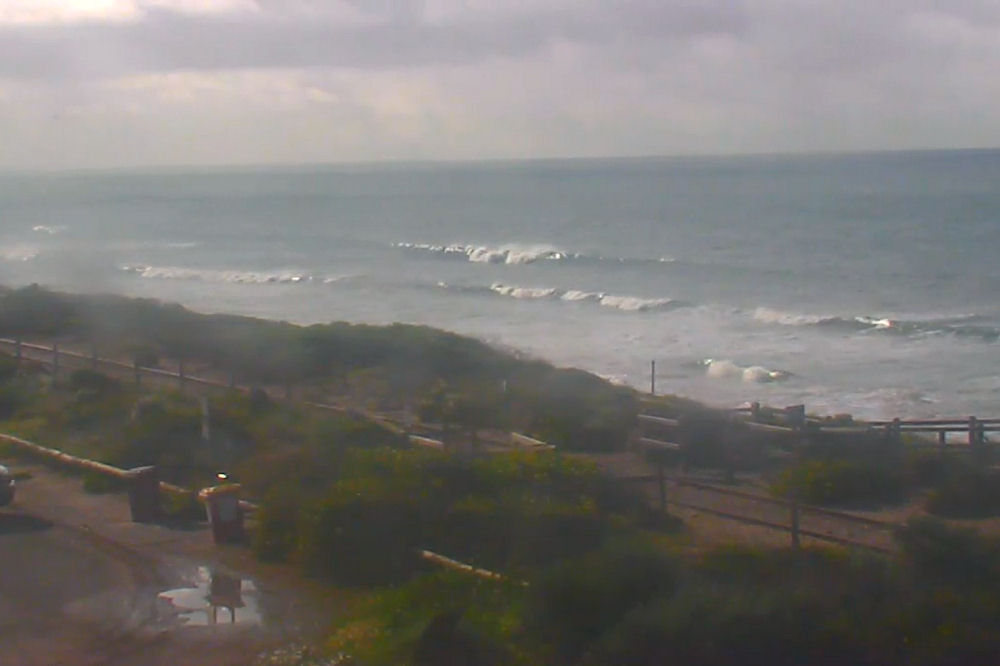 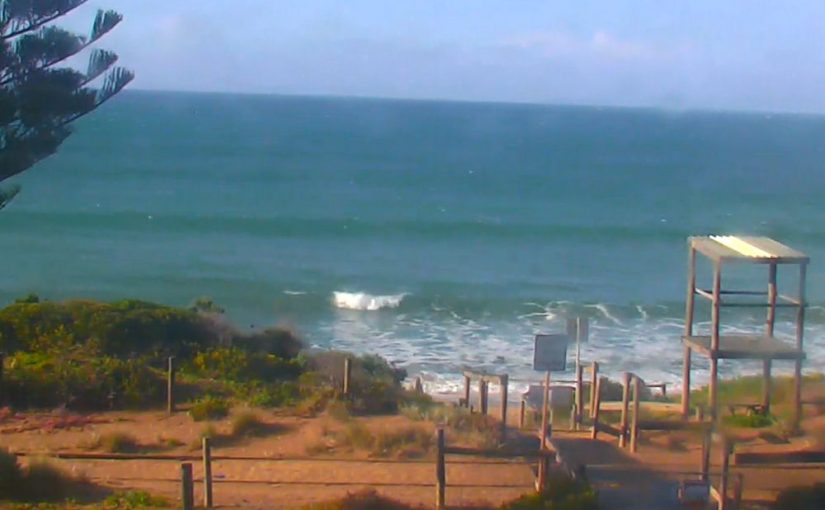 Strong offshores are blowing out the entire South Coast this morning, with NW winds gusting at 30 knots Surf has wound back to 2′ along the Middleton / Day St. / Surfers stretch, but there are occasional bigger sets in between long gaps. There are 2′ waves around at Chiton / Gap, Waits and Parson’s will be bigger but both blown out. The stong Nor-wester will hammer it for the next few hours, before a shift to a Westerly wind. The cross-shore breeze should start to ease after lunch, and maybe 15 – 20knts by mid arvo. The swell should lift too, so Middleton Bay might be alright for a late paddle. The Dump is another possibility for small waves and some shelter later. Check the surf forecast to see how the next few days are looking. 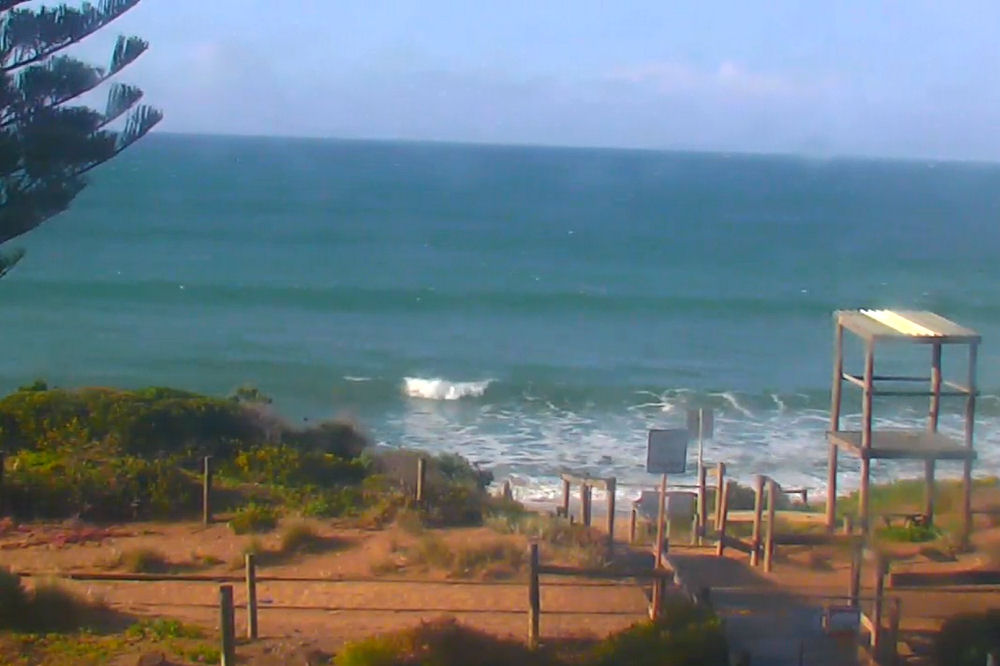 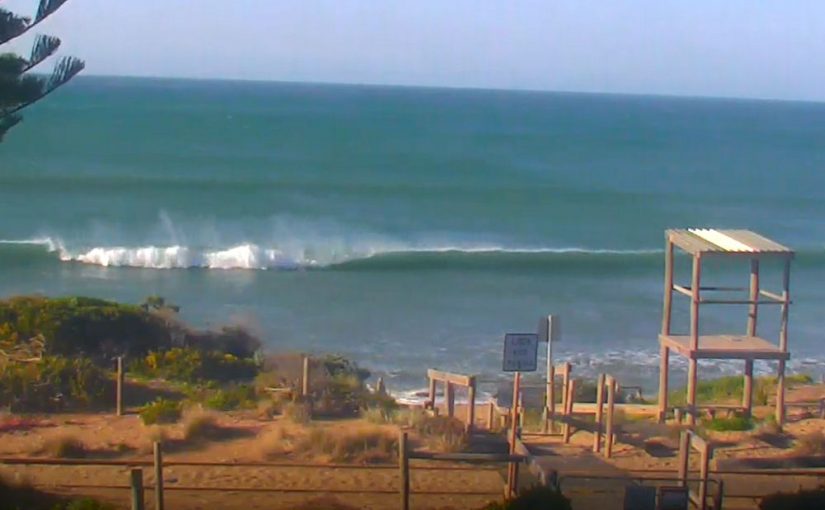 The swell is nicely lined up on the South Coast again this morning with offshore NNW winds at around 17 knots, but it may not last. Surf is still not a bad size with 3 – 4′ sets along the Middleton / Day St. / Surfers stretch and 5 minute gaps between then. There are 2′ waves around at Chiton / Gap, Waits and Parson’s will be bigger and the wind will slightly favour Waits. It’s looking like strong Nor-westers will blow it out by mid-morning, and gusts may be over 30 knots. That wind will then settle in for the day, and anywhere exposed will be blown out. The wind will turn Westerly later as a trough moves through SA. Check the surf forecast to see how the next few days are looking. 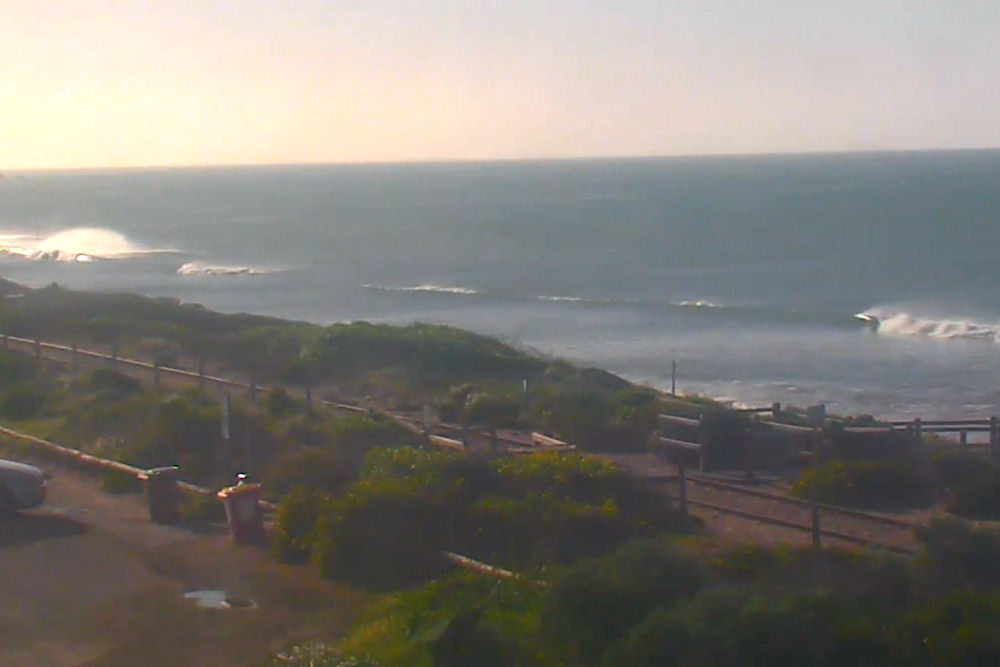 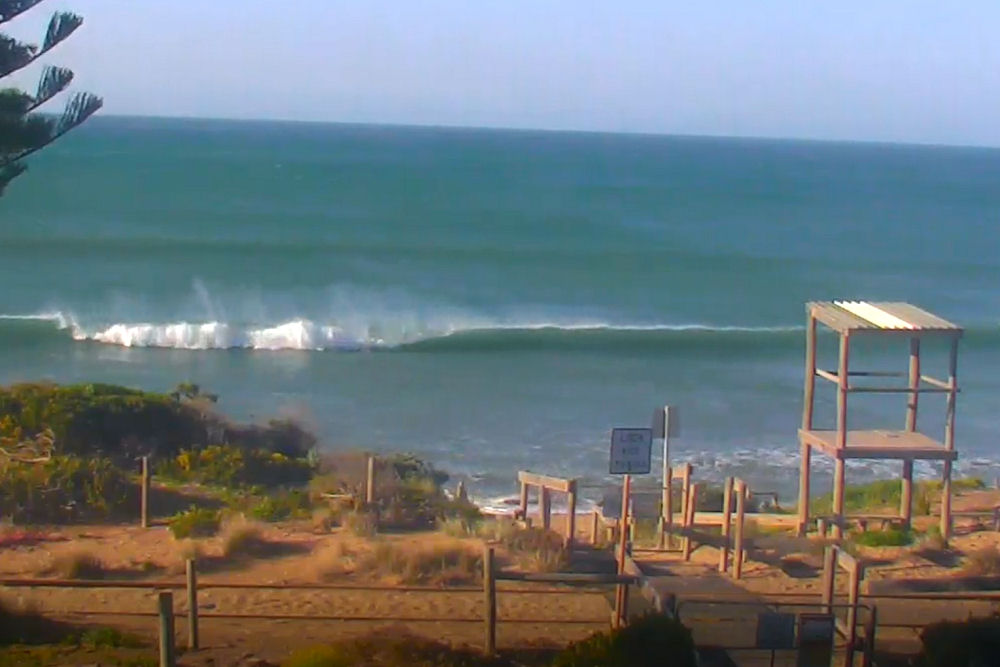 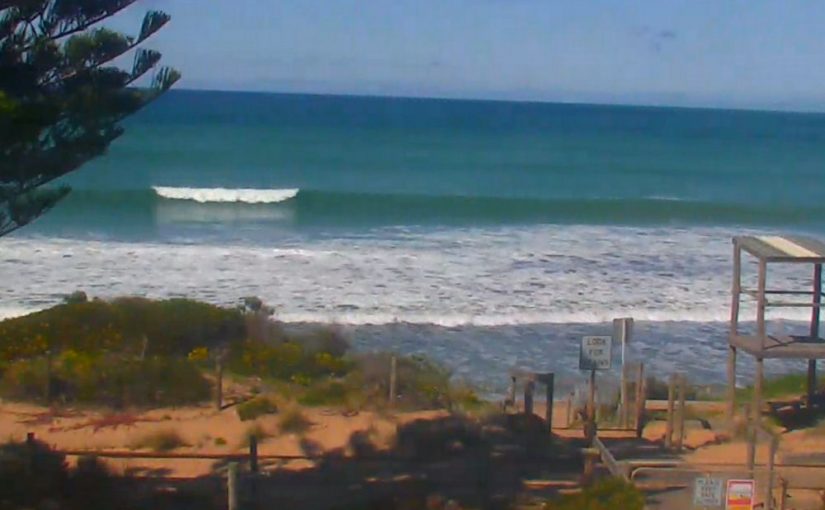 Conditions are clean on the South Coast this morning with light offshore NNW winds and well lined-up swell. It has backed off overnight, and surf around 3′ along the Middleton – Goolwa stretch and smaller waves around at Chiton. Waits and Parson’s will be bigger, the west in the breeze will favour Waits. The wind will stay offshore all day, possibly up around 20 knots at times but hopefully on 10 – 15 knots for most of the time. The swell will probably ease some more after lunch. Check the latest surf forecast to see how the next few days are looking. 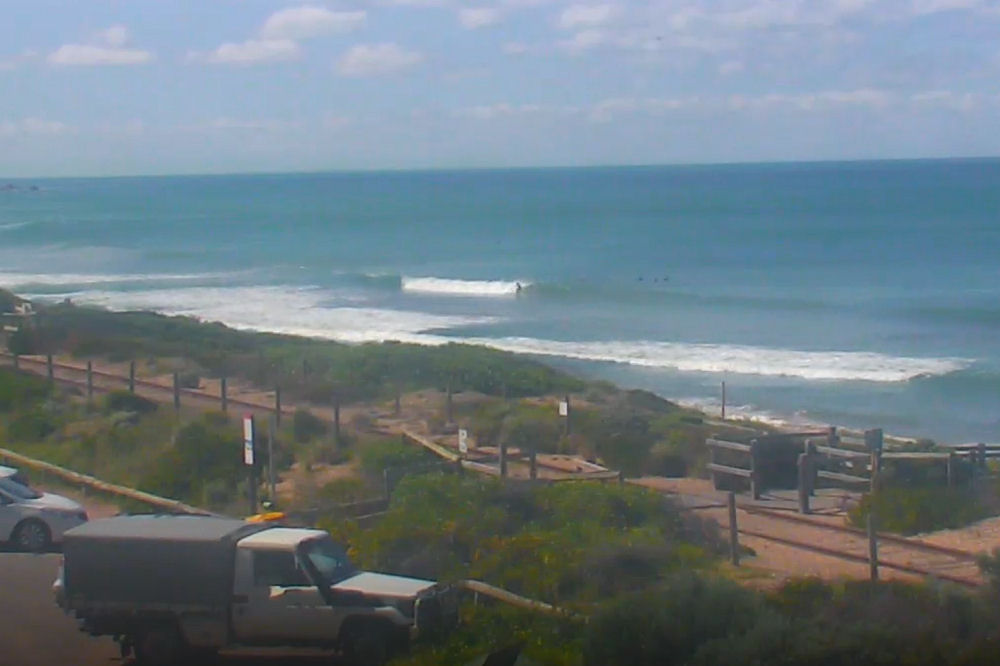 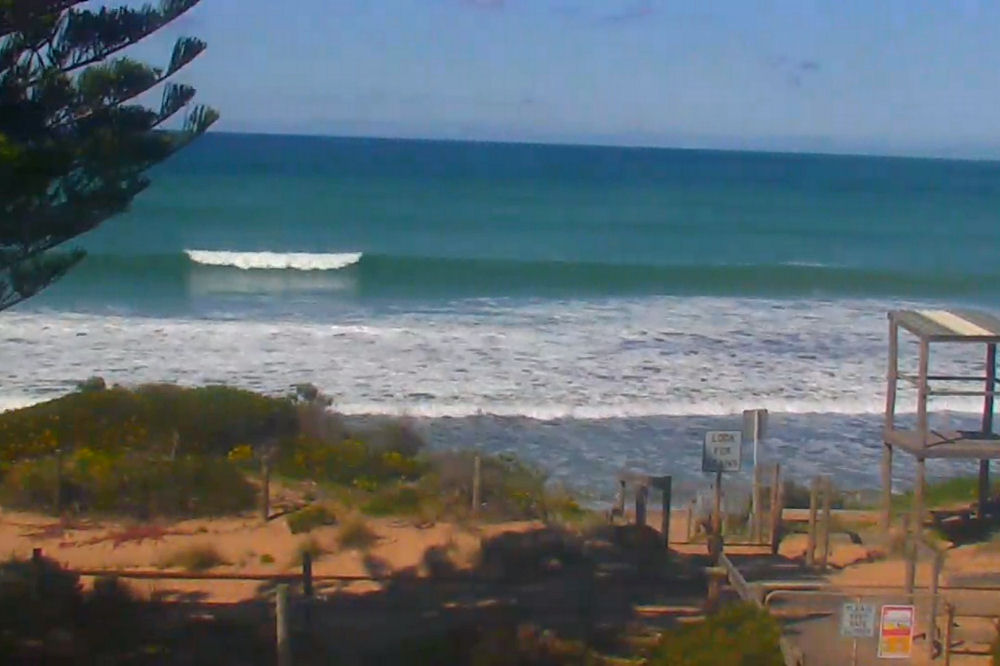 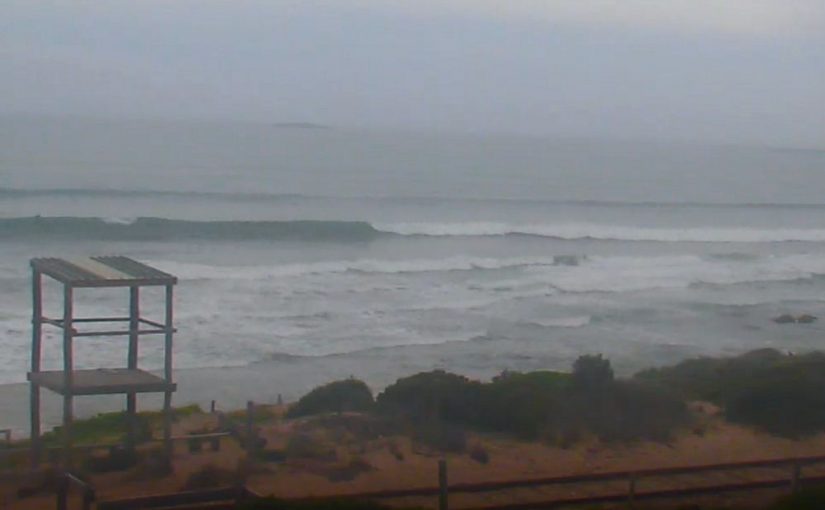 The wind has swung offshore on the South Coast for the start of the weekend, slightly unexpected as the BoM was going with fresh ENE winds this time yesterday. The swell is trying to straighten up but it has a ways to go, with NW winds at 15 knots early. Surf is still 4′ at Middleton and similar size along the Day St. / Surfers / Goolwa stretch. It’s semi-clean, kinda lumpy though. There are 4′ slabs pushing in at Knight’s but it’s also pretty funky around that side, the Dump has some smaller waves. Waits and Parson’s will be pretty mental and probably best left to their own devices this morning. The wind *should* stay out of the North, NE-NW and in the 10 – 20 knots range – possibly stronger gusts at times, dropping almost to nothing at others. Some new swell will push in after lunch, and it could be 5 – 6′ by evening. Worth keeping an eye on in case any of those swell magnets light up late arvo. Check the latest surf forecast to see how the next few days are looking. 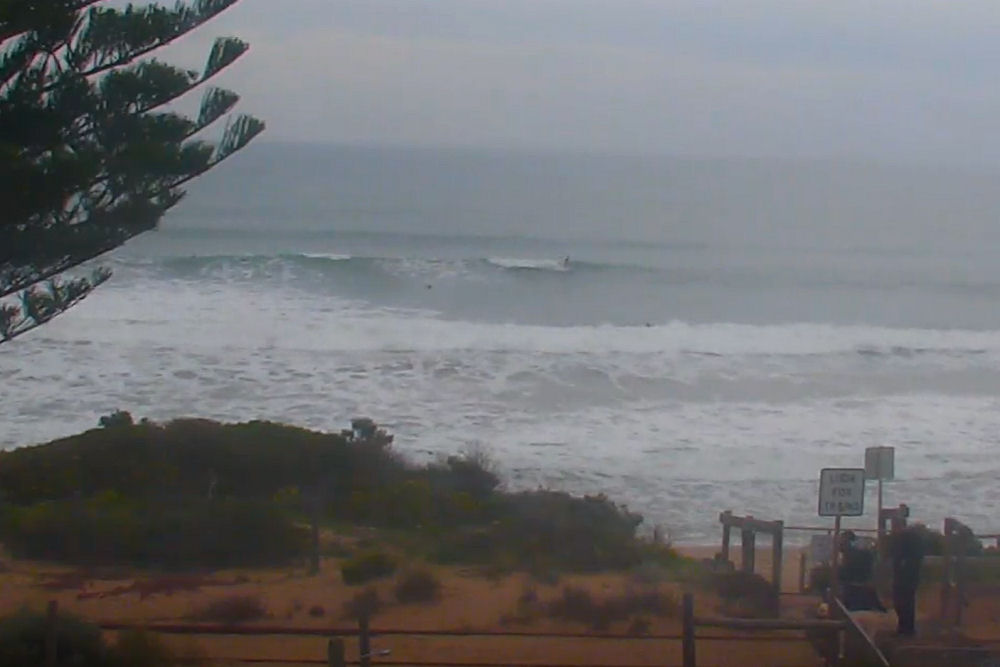 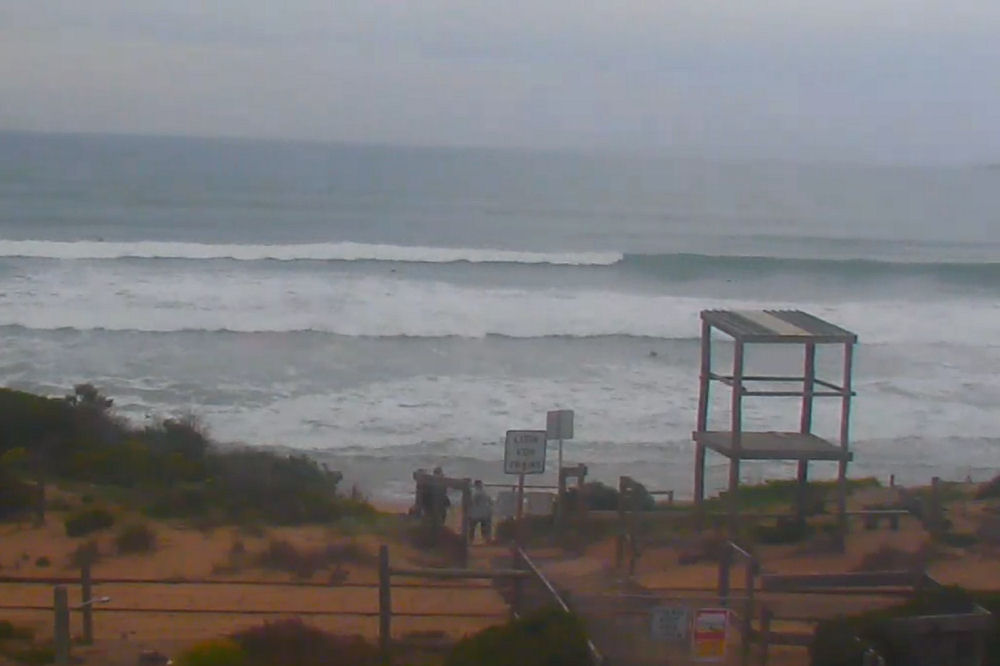 25 knot East winds are destroying the South Coast this morning, wasting what would have been another decent sized swell. Surf is still 3 – 5′ at Middleton but it’s breaking all over the place, and looking dreadful between Surfer’s and Goolwa. There are some 3 – 4′ slabs getting in at Knight’s and Boomer, but it’s pretty raw and lumpy around that side too. The Dump will have a few 2′ lumps if you’re desperate. Waits and Parson’s will be big and ugly, Parson’s will offer some shelter in beside the point but the swell will still be pretty messed up. There may be other options around that side if you have time to spare and curiosity. The wind will lighten off through the middle of the day, but conditions won’t tidy up until Sunday by the looks of it. More on that in the long-overdue surf forecast. 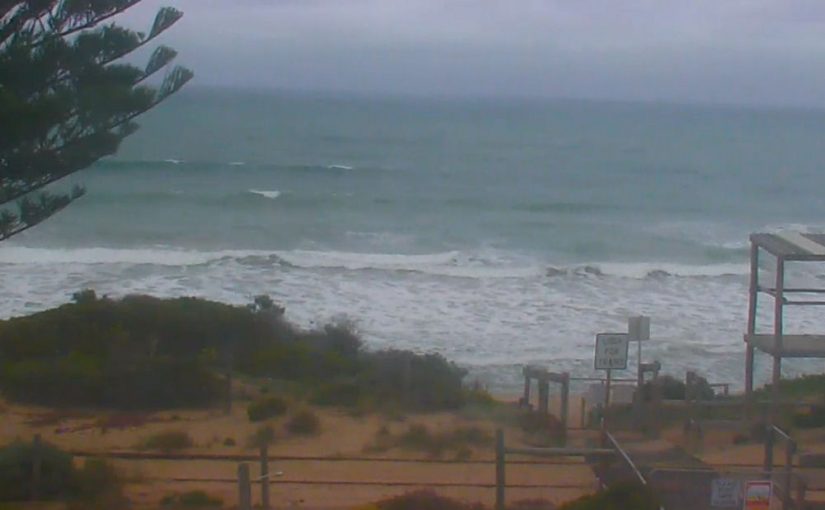 Swell’s still up on the South Coast, but an Easterly wind at 12 knots has added a wobble to it this morning. Surf is still easily 4 – 5′ at Middleton and t’s breaking a long way out from the beach between Surfer’s and Goolwa. Not as much of the swell seems to be getting in between Port Elliot / Victor this morning wit lumpy 4′ sets up toward Knight’s / Boomer and 2′ waves at The Dump. Waits and Parson’s will be closing out mostly but the wind will favour Parson’s for the intrepid. As the wind swings more SE a few other spots around that side will be worth a look. The sou-easter will mostly trash it after lunch and anywhere exposed will be pretty messy. The swell should hold up at least. 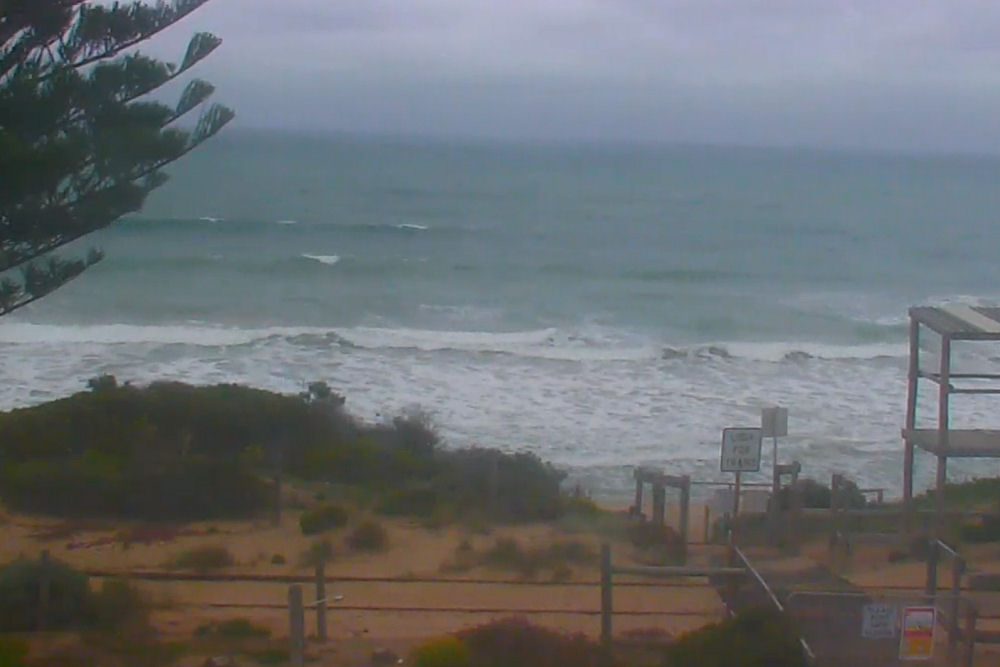 Conditions are clean on the South Coast early with light offshore North winds, and still plenty of swell. Surf is in the 4 – 5′ range at Middleton, and it’s still breaking a fair way out between Day St. and Goolwa. The Victor – Port Elliot stretch is worth a squizz again, with waves ranging from 2′ at The Dump to 4′-ish at Chiton / Gap. Waits and Parson’s will be closing out, but other options around that side of Victor might be worth checking. Be sure to hit it before lunch today, the Bureau of Met is predicting variable winds through the middle of the day swinging onshore SE after lunch. Conditions will deteriorate once the onshores kick in so make the most of it. 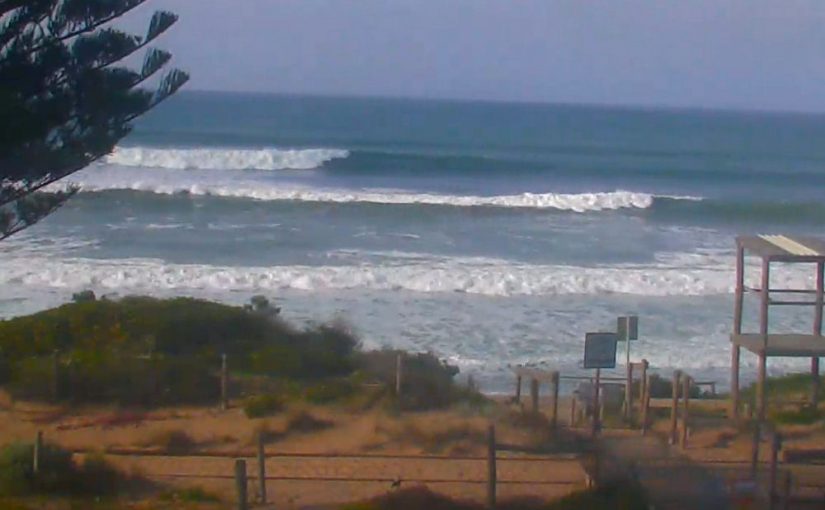 8am update: The swell is building, and some solid sets are now hitting the beaches between Victor and Port Elliot.  Chiton and The Gap are picking up 4 – 5′ sets, and Bullies is even getting the odd one breaking. The Dump is clean and around 2′, and it’s big with a hideous paddle around the Middleton side.  The wind is still good, but who can say how long that’ll last.

6am: The wind is actually light offshore from the North on the South Coast early, but the swell has a bit of a wobble from onshores yesterday. It’s still a good size with 3 – 4′ surf at Middleton, and a few bigger sets down toward Day St., Surfers and Goolwa. There are 3′ sets rolling through at Knight’s and Boomer, and a few 2 -3′ waves at Chiton Rocks. Waits and Parson’s will be solid, but mostly closing out on the sets. The BoM predicts light/variable winds all day, tending light SE after lunch. The light onshores later will maintain a slight lump all day. Swell may be bigger later. 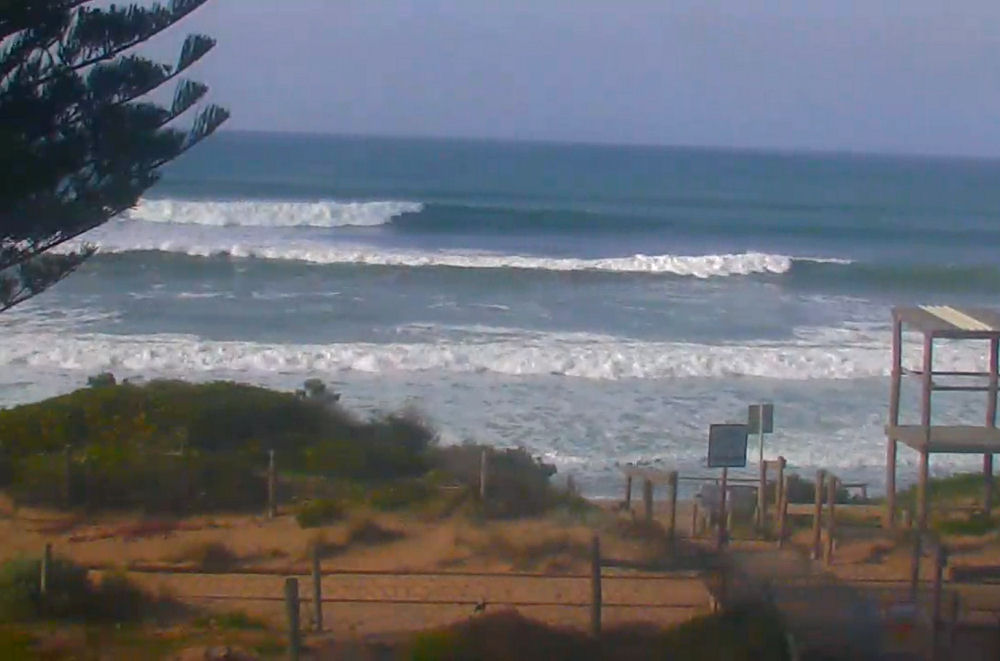