Surfsouthoz.com began in April 2000 as a “where to surf” guide, but in October became the first website in South Australia to commence daily surf reports. 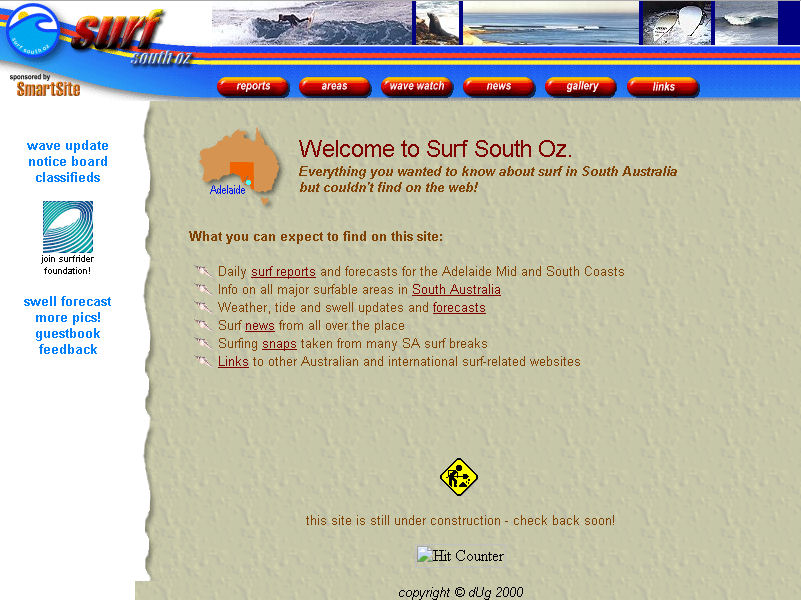 In April 2001 surfsouthoz entered into a partnership with internet startup Southcam, and in June of that year effectively became absorbed into Southcam. The surfsouthoz website was redirected to Southcam soon after, and Southcam became the first website in SA to offer live surfcams and daily surf reports. At the height of its popularity Southcam ran a total of 4 webcams on the Fleurieu Peninsula – two on the South Coast ( Middleton and Chiton Rocks ) and two on the Mid Coast ( Seaford and South Port ).

The surfsouthoz hiatus lasted until October 2002… when for various reasons SA was once again without daily surf reports or webcams. After a Coopers Ale fueled conversation one night camped at The Spit with The Surfdoc, the (rash) descision was made to re-launch the surfsouthoz website. The plan was a new look website and daily surf reports from the Mid and South Coasts, and a sister website, Surfbells.com, sharing the same technology and operating on Victoria’s Surfcoast. The same group of freinds that formed the basis of the original reporter network kicked into gear once again, and as summer approached traffic surged on the two new websites.

In 2004 Queensland based national surfing website Coastalwatch.com.au approached surfsouthoz regarding possible locations for webcams in South Australia. Surfsouthoz came to an arrangement with Coastalwatch whereby it would adopt a caretaker role in respect of the cams – in return for use of the vision on the surfsouthoz website. Within a few months sites at Seaford and Chiton Rocks were negotiated and operational, and  South Australian surfers had access to free webcams once again.

In 2005 the surfsouthoz website faced dramatic increases web traffic, and a resulting increase in running costs. Fortunately, several kind supporters – Aquatic Dreams, Snow and Surf Co, Glen Duncan ( Nasty Surfboards ) and Norm Cooke to name a few – got behind the venture and helped cover costs directly and indirectly. Several other smaller advertisers kicked in, and by the end of 2005, surfsouthoz.com actually broke even.

By early 2006 the online advertising market had partially recovered from the dotcom bust, and surfsouthoz began to use this to supplement direct advertising. It soon became apparent that the site developed in 2003 was grossly inadequate, and a redevelopment commenced. Several redesigns and redevelopments followed over the next dozen years, including many that never saw the light of day. The first mobile website was launched in 2010, targeting popular small screen devices including iPhones and several models running on Android. 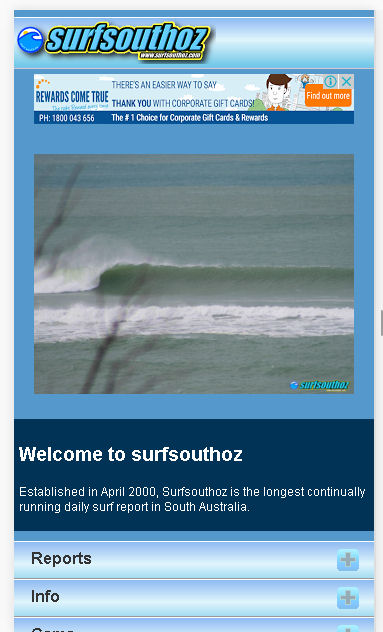 In mid 2014 traffic to the surfsouthoz.com mobile website overtook the desktop website, and a redevelopment was hastily embarked upon. In early 2016 a new responsive mobile website was launched using a WordPress back-end, and custom built RESTful front end.  Content is accessed via the WordPress JSON API, and the weather & data feeds are provided by custom microservices written in PHP.

The mobile and desktop websites were merged in December 2017, and a new-look responsive website was launched under the .com.au domain early in 2018. New features and content are constantly being added.

Today surfsouthoz.com has an annual audience of around 25,000 surfers, 80% of whom live in South Australia. The website consumes over 10GB of bandwidth a month.

It consistently rates among the top ten sporting websites in the state.