That time of year is fast approaching where the weather’s great, and we’ve all got endless hours of annual leave to squander. A trip to Southern Yorke Peninsula ( or further west ) usually rates pretty highly as an Xmas holiday option for summer wave-starved Adelaide surfers, but it’s often a lucky dip when it comes to scoring waves. In the weeks between Christmas and the Australia Day long weekend, flat spells leave evergreen spots like Ethel’s Ledge and Chinaman’s looking more like paddling pools. It’s on such days we’re forced to think outside the box a bit, and consider ( shock horror! ) options that don’t include surfing. With that in mind, here’s ten things to do at Yorkes when the surf’s flat.

This little gem is on the scenic road from Corny Point to Pt Annie. It’s a perfect half-moon bay with bright white sand, red granite bouldered headlands and beautiful greeny-blue water. It’s also usually deserted, and if it’s a warm day, you simply have to take a dip. But for god sake please…  should you desperately feel the need to go “au naturelle”… think of the children.

Heading North on the Brown’s beach road in Innes National Park you’ll pass two small bays after Royston Head – Dolphin Bay and Shell Bay. Both are very sheltered and feature clear, blue-green water, but Shell Bay has a natural rock pool deep enough to dive into. It’s like the Mediterranean except it’s free, and with less middle-aged German nudists. Enjoy finding it!

The abandoned township of Inneston inside Innes National Park is always worth a look. It has plenty of signage and information boards to tell you what all the weird and wonderful rusty machines were actually for. If you’re into the paranatural or the supernormal, why not come back and night and introduce yourself to the apparitions of former residents you stumble upon?

Near Edithburg at Wattle Point is a 17km square paddock full of huge power generating windmills. They are pretty cool to watch from a distance, but when you get up close they are even cooler. It’s both exciting and slightly unnerving standing beneath the massive, whooshing blades with a good breeze, and there are great photo options at sunrise and sunset.

Wander just slightly off the beaten path in Innes National Park and see how many different Australian native animals you can find. Most likely it’ll be Kangaroos or a family of Emus, but now and then you can spot the odd Echidna or if you’re very lucky, the rare endangered Heath Goanna. Failing that, if you want to go full Steve Irwin there’s always plenty of Red Bellied Black and Peninsula Brown snakes.

The food’s good and the place is still fairly new, and there’s big TV screens if there’s any game you absolutely can’t miss. And there’s this dog. Just look at him. He’s living the dream, right? After you’ve stuffed yourself full of Crumbed Calimari, a short walk down to the jetty, where the locals may well be catching a few squid, finishes it off nicely.

7. Check out some ruins

Go for a drive anywhere out of town on Southern Yorke Peninsula and you’ll pass plenty of abandoned properties. Some, despite appearances, may still be occupied by licensed firearm owners, or in a state of dangerous collapse. Use discretion, but definitely explore and get great glimpse into what life was like for the earlier Y.P. settlers. Don’t steal stuff though. M’kay?

Storms in 2015 removed much of the sand that covered the wreck of the 711 tonne iron ship Ethel for the last 25 years, so it’s a great opportunity to have a look before it’s buried once again. The sand is rumoured to have moved ’round West Cape and into Pondalowie Bay, where it ruined the left hander for a number of months.

9. Grab some food at Corny Point, eat it at Berry Bay

Lunchtime or dinner time are good options to soak up the serenity of Berry Bay, just 5 minutes from tasty food in the small town of Corny Point. There are a few car parks and lookouts near the lighthouse, and a bigger car park with a fabulous view overlooking the Southern end of Berry Bay. Grab a six pack of Coopers to wash it down, and enjoy the view.

Both spots have plenty of fish ( sometimes BIG fish ) and clear water on calm days. The wreck of the SS Willyama is in fairly shallow water and isn’t too far out from the long, sandy beach at Marion Bay. Large pods of dolphins frequently cruise along the coast between Stenhouse Bay and Marion Bay.  They have been known to get very frisky, at times. 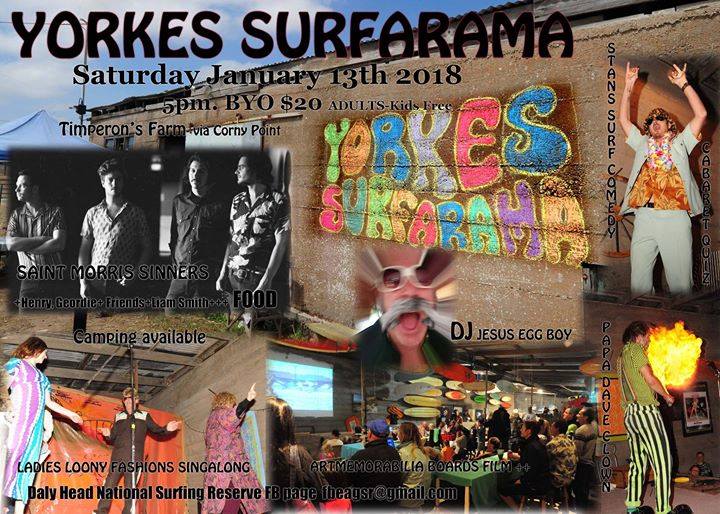