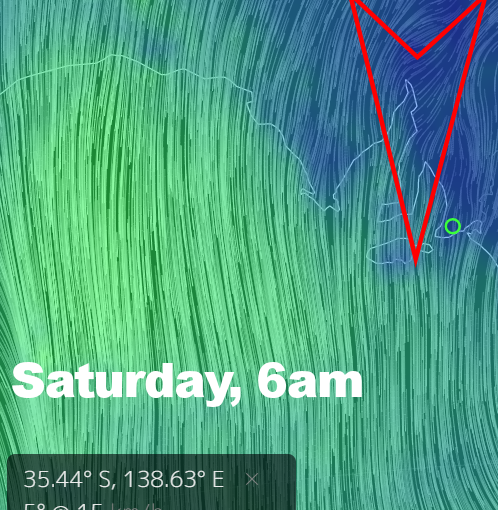 After strolling along pretty much any stretch of South Australian Esplanade this afternoon, very few people could blame for sticking a fork in winter’s arse and announcing, merrily, “it’s done!”. As I type this there’s almost no wind across the entire state, and the sea is glassy smooth over every peninsula SA has ( yes… even the Dudley and the Jussieu! ). There’s swell too… and today was very nice… but as we head into the last weekend of August things are about to turn.

Early on Saturday the wind will start to pick up from the North, tending NE at first and maybe under 10 knots… but probably not for long. A 20 knot Northerly looks like settling in from about mid-morning onward. The Mid Coast should have a few 2′ waves early, but as the wind arrives it’ll become bumpy quickly.  The South Coast will be clean and there will be waves in the 4 – 5′ range at Middleton. It’s definitely worth a trip, but only if you can hit it at dawn. Most of the South Coast will be probably be blown out by morning smoko. 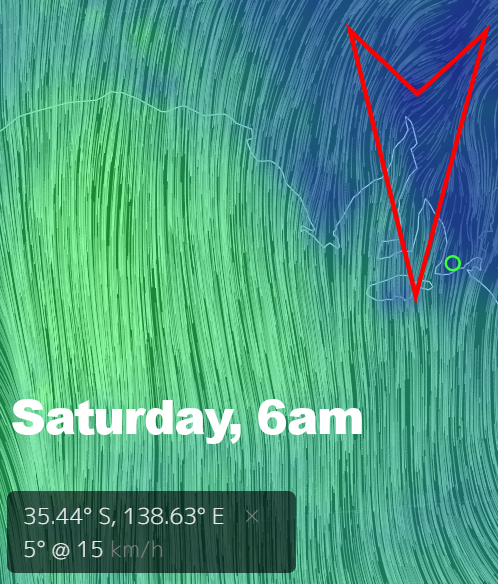 The wind will have more West in it early on Sunday off the back of a cold front that will roll through overnight. WNW winds will be up around 25 knots in the morning, tending more WSW at 27 knots after lunch. The solid swell should stui=ick around on the South Coast, but options will be limited to sheltered / part-sheltered sports. Middleton Bay might be OK. The Mid Coast will go into semi-stormy mode, and waves should get up around 3′ after lunch – but it’ll be messy with fresh onshore winds.

The wind and weather should quickly moderate overnight, and into the start of the working week we could well be back to light / variable winds. The breeze will be more southerly on Monday so the South Coast will probably be light onshore, bit if there’s some East in the breeze the Mid Coast might be glassy with some leftover lumps. Middleton should still be in the 4′ range and wind affected, the Mid Coast might see a few 2 – 3′ waves before the swell eases from mid-morning onward. 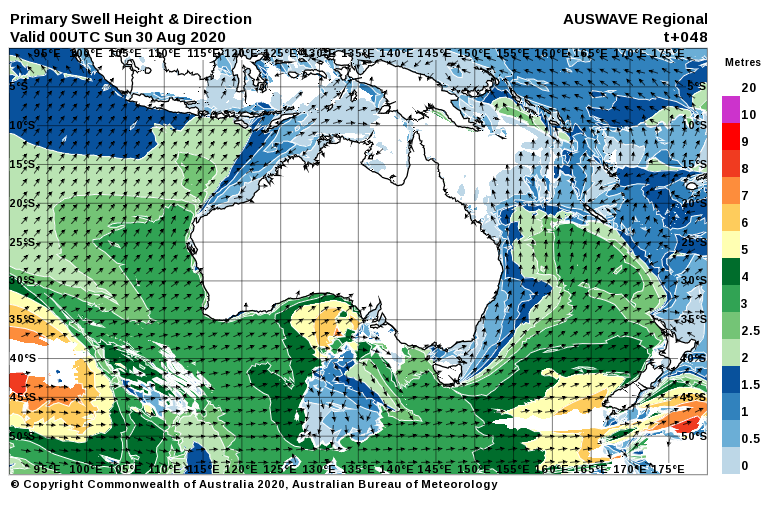 Tuesday will open with winds from the North, up around 22 knots at dawn and strengthening ahead of another cold front.  The Mid Coast will be bumpy with surf around 1 – 2′, and a more WSW swell will mean less size on the SOuth Coast – maybe 2 – 3′ Middleton. The South Coast will be blown out from dawn to dusk, and by late more NW winds will probably be gusting over 27 knots.

Wednesday will be windy and messy, with WNW winds at 30 knots settling in for the day.  Wave heights will pick up on the Mid Coast, and there’s a chance stormy spots might come into play after lunch. The South Coast should also score a building SW swell, with 3′ waves at Middleton building to 5′ or s after lunch. It’ll be blown out all day by the strong west winds.

The strong westerlies will continue into Thursday, and so too will the stormy waves on the Mid Coast. Surf will remain in the 3′ range, and again, stormy venues might be worth a squizz. The swell direction looks too West to really light up South Coast breaks, and Middleton will probably remain in the 2 – 3′ range… possibly smaller if the swell maintains the direction the models are suggesting.

The weeks should wrap up with a fresh sou-wester on Friday, and easing conditions heading into the weekend. The Mid Coast will probably remain messy with surf in the 2′ range. Size is hard to call that far out on the South Coast, but probably somewhere between 2 – 4′. Conditions should ease with lighter winds into Saturday. More on that next week…