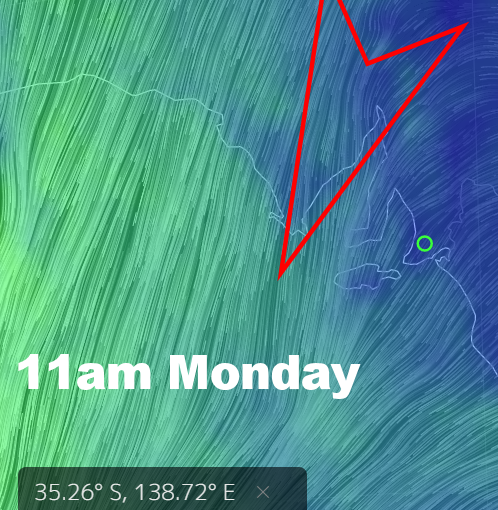 We really did see the dream end on the South Coast this week, hey?

July seems like a distant memory with its seemingly endless run of offshore winds and fine weather on the South Coast, but the first week of August feels more like a climactic twilight zone.  It snowed in the Flinders Ranges today, and on Tuesday morning more than a few Southoz towns woke to temperatures 3 or 4 degrees below freezing. Meanwhile, the wind has been 15 knots from the East over the Fleurieu and Yorke peninsulas… as if we passed “Go”  and proceeded straight to the month of November. Weird.

That Easterly influence will persist into and through the weekend, and that’s not great views for the South Coast. A lack of west in the swell is also not great news for west-facing coastline, including the Mid Coast and breaks between Pondalowie and Berry Bay over at Yorkes.

Saturday looks set to kick off with 15 knots SE winds and messy 2 – 3′ surf at Middleton. A more SW swell direction might bring a few 1′ waves to the Mid Coast, and it’ll be clean with moderate offshore winds. West facing breaks over at Yorkes will be clean all day, and at least not flat.

The breeze will ease on Sunday morning but it’ll still be from the East – 7 knots in the morning. The lumpiness will persist on the South Coast which is a shame, because the swell will build overnight and lift wave heights to 3 – 4′ at Middleton. The Mid Coast will be clean, but only 1′ again. 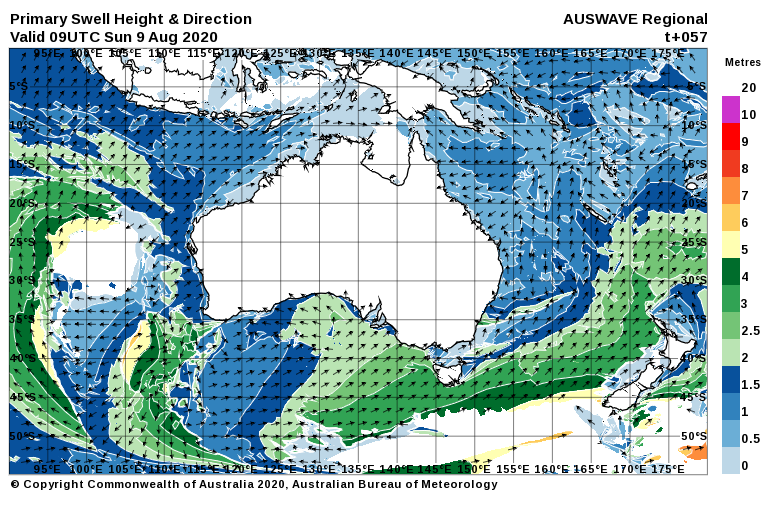 The wind will finally have some North in it on Monday morning, but it’ll take a few hours to iron on the lumps on the South Coast. Surf should be around 3′ at Middleton, maybe cleaner after lunch after a few hours of NNE winds.  The Mid Coast looks small, with surf only around 0.5′. 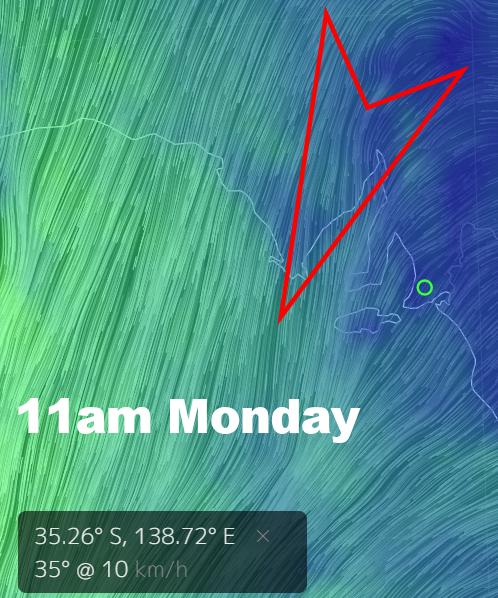 Tuesday will dawn to fresh Northerly winds up around 22 – 25 knots not long after sunrise. It’ll be clean on the South Coast, but probably on the blown-out side along exposed stretches. Wave heights will ease back to 1 – 2′ at Middleton. The Mid Coast will be almost flat, and bumpy with the wind blowing chop down the gulf.

The wind should be more NW early on Wednesday,  17 knots and shifting more WNW after lunch. The swell will tend more WSW and it’ll probably lil=mit wave heights to around 1′ at Middleton.  A new swell should lift the Mid from 1′ in the morning to 1 – 2′ after lunch, so maybe check Moana for a late paddle.

A change is likely on Thursday, with West winds at 25 knots shifting W-SW after lunch. The Mid Coast will be choppy 1 – 2′ in the morning, possibly bigger after lunch with a medium-sized stormy.  It’ll be semi-clean on the South Coast but probably a bit blown out with strong cross-onshore winds and surf in the 2 – 3′ range at Middleton.

Friday looks like a fresh sou-wester, but let’s revisit that at the end of next week.