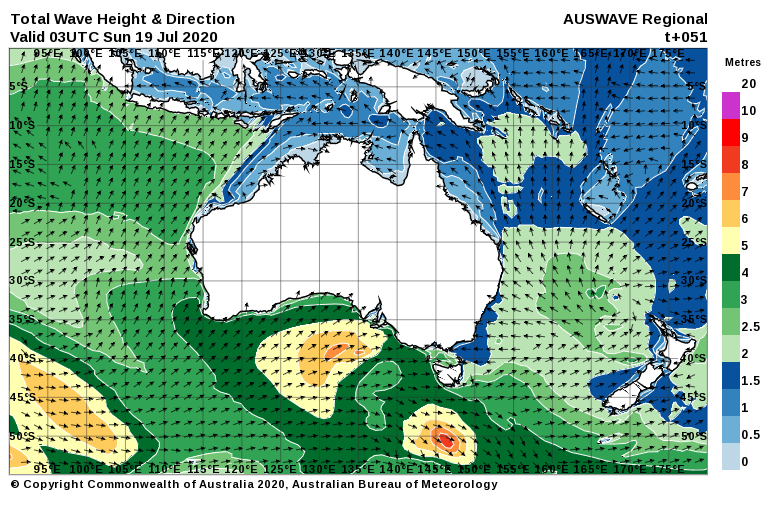 Is anyone else still just waiting for winter 2020 to march across SA from west to east and hammer us with driving rain squalls and days of frigid darkness? No? So it’s just me then?

We’ve reached the end of yet another week of light wind and sunny weather, where the South Coast has been clean and pleasant pretty much every day. Even the Mid Coast managed a few days of surfable ( c’mon grant me some poetic license here, OK? )  waves with light winds, and needless to say, Yorkes and that other peninsula further west have been delightful all week.

Here’s the synoptic chart for the next few days. Notice anything? No… you don’t… because it actually looks almost identical to the chart from the last forecast. And maybe it is… and maybe I just changed all the dates… who can say?

The approaching trough will swing winds Northerly overnight tonight and early the breeze will be up around 15 knots. The South Coast will be your best bet on Saturday, but exposed stretches may become blown out mid-morning. Wave heights look in the 2′ range at Middleton, maybe a smirch bigger down toward Goolwa. The Mid Coast will be bumpy and 1′ all day.

The breeze will have more west in it early on Sunday, probably up around 22 knots at sunrise. The cross-shore winds will again blow out open beaches on the South Coast, surf will probably be 2′ at Middleton but it should  build after lunch.  A late paddle in the bay at Middleton is a possibility. The westerly swell will produce semi-stormy waves 2′ on the Mid Coast in the morning, but it should build to 3′ after lunch as the tide pushes in. Part sheltered spots may be worth a look, but grommies will probably be frothing over head-high onshore Seaford.

West-facing breaks over at Yorkes will be wind affected all weekend, but the more exposed breaks along the South Coast of Innes NP should be picking up plenty of swell – just a bit blown out.

The wind should all but drop out overnight on Sunday, leaving a very light westerly early on Monday.  The new swell should lift wave heights into the 4′ Middleton range and it’ll be reasonably clean in the morning.  It’s hard to say if the breaks between Victor and Port Elliot will get going, but it’ll be worth swinging by for a look. The wind will swing more to the SW after lunch, but it looks like it’ll hardly top 10 knots all day. There should be a few lumpy 2′ waves leftover on the Mid Coast too. 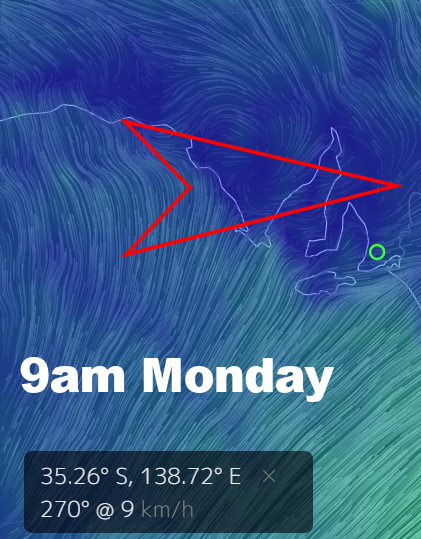 The wind will become very light mid-week as a large HIGH moves over Adelaide. There’ll be no wind early on Tuesday, and much of the Fleurieu and Yorkes should be glassy – possibly for much of the day. The Mid Coast should manage a few 1 – 2′ waves while the tide co-operates, and the South Coast will be back around 2 – 3′ at Middleton.

Wednesday might see a hint of North in the wind before it swings light Easterly and settles in for the rest of the day. The Mid Coast will be glassy again but probably smaller than the day before – around 1′. The East in the wind might add a few wobbles on the South Coast where waves are looking in the 1 – 2′ range at Middleton.

A light Northerly will follow on Thursday, and it doesn’t look much over 5 knots all day. A new WSW swell should lift size on the Mid Coast back to 1 – 2′, and it’ll probably be glassy all day. Middleton is looking around the 2′ mark, and the whole South Coast should be as clean as a whistle all day.

Most of Yorkes will be good mid-week.

The Northerly looks like it’ll gain strength on Friday ahead of another front, but let’s see how that’s panning out mid-next week. There’s also something large brewing out in the Indian Ocean heading into next weekend. Hope to have more news on that in a  few days time…